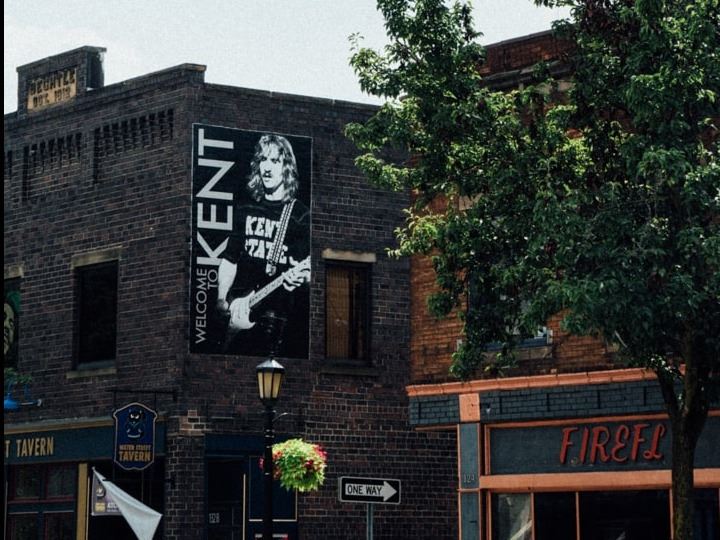 Whether you're kayaking the Cuyahoga River, strolling downtown, climbing the corporate ladder or biking to classes at the second largest public university in Ohio, one thing is clear - there's no place like Kent.

Kent is an American original, with history and legendary stories at every street corner, thanks to the eclectic mix of people that have called Kent home. From an Ohio Governor and internationally acclaimed composer, to comedians Drew Carey and Arsenio Hall, Kent has always been a place full of great characters.

The original "Tree City," Kent is a college town and more - a community of families, businesses, and industries located on the banks of the Cuyahoga River. As the home of Kent State University, Kent residents enjoy the highest educational values and all of the benefits of living in a university city.

Kent offers a full complement of community living, including:

Jobs are based in the University, area businesses, and important national and international employers. The result is an unusually rich quality of life.

According to the 2010 Census, the resident population of Kent is 28,904, with the student body adding another 28,981. The community is home to an internationally diverse population, an aspect that is strongly valued by residents. Kent is a mature, largely built-out community with little remaining room to grow, so redevelopment and infill is a top priority. The population has remained steady during the past decade, and Kent has an unusually high level of education per capita, nearly twice the national average.

The total labor force is about 15,000, with an unemployment rate near the current national rate. Employment is primarily in services, manufacturing, and wholesale/retail. In addition to Kent State University, the City School District and the City government, major global employers include:

Kent is one of only 40 Main Street Communities in Ohio, which makes available significant local and state resources for restoration and redevelopment projects in Kent. Main Street Kent co-sponsors a series of community events downtown in partnership with Kent's arts, cultural, business, and sports groups that attract thousands of students and families into downtown all year long.

Kent has a rich and storied past that includes tales of native Americans, the Cuyahoga River, and the second largest railroad junction west of Philadelphia. Along came John Davey (founder of Davey Tree), Kent State University, and the rest is history.

From the Civil War to Vietnam, Kent has always been a city rich with people who make a difference. So much so in fact, they were willing to risk their lives in hopes of changing the direction of a country at war. On May 4, 1970 four shots in Kent were heard around the world and the world listened.

The world is still listening to Kent today.

Kent is what happens when you mix 29,000 students with a bunch of bohemian baby boomers, Gen Xers, empty nesters, retirees, young families, old families, blue collar, white collar, and tie-dyed no collars all in one place.

It's a place where you never know what to expect, which is exactly why people choose Kent. This isn't a city with a script; it's a city full of people who write their own script and improvise daily. Together these scripts become Kent's story.

With its tree-lined streets, sidewalks, neighborhood schools, and parks, Kent feels like home no matter where you're from.

Kent offers a great mix of downtown living, charming turn-of-the-century homes, and all the modern conveniences of new suburban centers. Some places make lifestyle choices for you. Kent leaves the choices up to you.

Great quality of life, job growth, recreational activities, cultural programs, environmental stewardship, and community pride don't just happen. They are the product of good planning, meaningful citizen input, and hard work. That's exactly what Kent has been doing for decades, and it shows.

Admittedly ambitious, but that's what setting strategic goals is all about - dreaming big and striving every day to get a couple of steps closer to the community's aspirations.

Kent has raised the bar on environmental stewardship, surpassed our sustainability goals, and adopted green building as standard practice. The Kent Dam project received national and international acclaim for being at the forefront of river restoration, and our aggressive trail building has made the rejuvenated river a staple of outdoor recreation opportunities in Kent.

Kent State University is Ohio's second largest public university and it is recognized nationwide as a significant research and teaching university. In addition to over 250 undergraduate and 75 graduate programs, Kent State is home of the renowned Liquid Crystal Institute and the Silverman School of Fashion Design and Merchandising. Kent State enrolls over 28,000 students on the Kent campus and is the largest employer in Portage County with 3,150 employees.

Among universities in Ohio, Kent State is known for providing highly personal attention to its students, who come from across the nation and 90 foreign countries. And for its 170,000 alumni, Kent remains a place of fond memories.